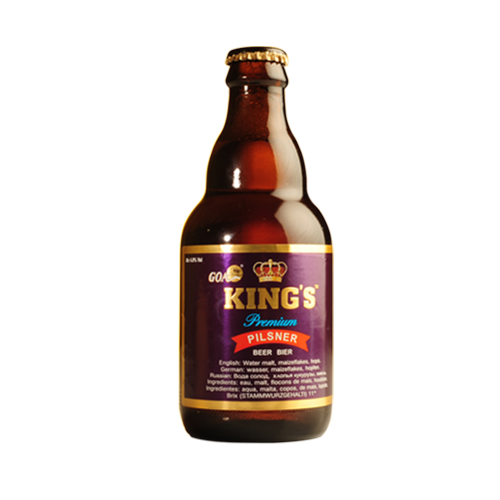 Viiking Group acquires Goa’s Kings Beer, plans subsequent launch across India. Mumbai, Maharashtra, India, 03 August, 2015 : Viiking Group, which has interests across sectors such as Hospitality, Media and Entertainment, Health and Fitness, Realty and Aviation, among others, has acquired Goa’s highly popular King’s Pilsner Beer for 90.0 crore INR. Formerly owned by Impala Distillery and Brewery Ltd., King’s Black Label Premium Pilsner Beer, as it was formerly known, has enjoyed the reputation of having superior taste and refreshingly different packaging and positioning. The beer was one of the first Pilsner beers manufactured in India.

As per this acquisition, Impala and ?#?ViikingVentures? will form a partnership which is valid for 20 years, wherein the beer will be manufactured and bottled by Impala exclusively and all production costs and marketing responsibilities would be handled by Viiking Ventures.

Post this acquisition, the beer has been rechristened to be called Goa Kings and will don a fresh logo and label. The colour of the label has been changed to a playful purple from its statement black, and the label sports a crown with the name being embossed, giving it a regal feel (the logo has been embossed (KINGS) and to the crown few colours and jewels have been added). A new back (label) has also been added.

As part of the expansion strategy, the beer will be launched in new markets in the country, starting with Maharashtra and Telangana, followed by Karnataka and Andhra Pradesh, and finally, the other states of India.

Currently available in a 325 ML pint in the Mild category, Goa King’s will soon be in 500 ML and 650 ML cans in Mild and Strong categories. The beer is priced at Rs. 85 in Maharashtra.

Mr. Sachiin Joshi, Chairman – Viiking Ventures said, “The unique taste comes from the waters of Goa used in production, making it the preferred choice for the beer-drinking population. People from around the world have had it in ?#?Goa? and are eagerly awaiting its global availability. The product has immense potential, even overseas.”